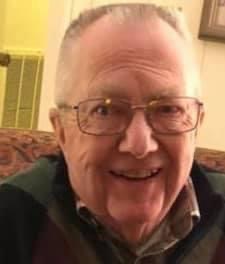 Allan L. Fish passed away on May 8, 2022 after a short illness.  He was born in Spencer, Indiana on November 7, 1935 to Dr. L.O. Fish and his wife Grace Olivia (Tanner).  After graduating high school, he attended Indiana University where he earned a B.S. in Chemistry.  He subsequently was awarded an M.S in Chemistry from Butler University.  He worked his entire career at Eli Lilly and Company as a chemist in various roles where he made many important lifelong friends.  While accompanying his veterinarian father on farm calls, a young Martha Poff caught Allan’s eye. They were married on July 23, 1956 and remained together for nearly 64 years. Allan was preceded in death by Martha and their daughter Penny (Abell), and is survived by his son, Frank Fish of Nashville, TN along with 8 grandchildren and 8 great-grandchildren.  An avid fly-fishermen, Allan was known for his skillful fly-tying and for his involvement in Operation Healing Waters, an organization working with injured war veterans.  A lifelong musician, he played piano and organ, serving both as a church organist, and playing piano for many years in a local big band. He was a long-time member of the Greenwood Presbyterian Church where served as Clerk of Session and Deacon.

Viewing will be Saturday, May 14th from 11:00am – 12:30pm at Wilson St. Pierre Funeral Service & Crematory, Greenwood Chapel 481 W. Main St. Greenwood, Indiana followed by a private graveside service. A Celebration of Life for Allan and Martha will follow later this summer.  In lieu of flowers, the family requests donations to Operation Healing Waters in his name.