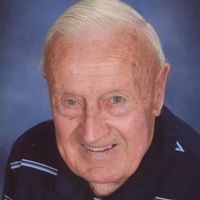 Allen LaVerne (Jerry) Wright passed away Friday, May 27, 2016 at Homewood Health Campus. He was 92. He was born March 21, 1924 to the late Basil and Gladys (Grove) Wright. On June 27, 1952 he married Lois Hiland. She passed away March 21, 2001. Jerry graduated from Dover High School in 1943. He grew up farming and that was his life until retiring in 1990. But he didn’t stop working. You would see him with a hoe in hand working in the garden or walking along the edge of the field cutting down weeds, mowing the yard, etc., not slowing down until just a few years ago. As a young man he was an active member of the Boone County Rural Youth. He was a member of the 1948-49 State Championship basketball team. He then coached the team to two more state championships in the 1949-50 and 1950-51 seasons. He was also on the Rural Youth softball team which was State Runner-up in 1950. He was an active member of the Lebanon First Baptist Church, serving on various boards and committees over the years. He and his wife also worked in the nursery for approximately 30 years. He was a 65+ year member of the Masons; his last membership with Hazelrigg Lodge 200. He enjoyed watching sports, especially IU basketball. Other hobbies include gardening, auctions, word search puzzles, card games, and meeting people. He was always quick with a story or a little prank. Survivors include children Stewart Wright of Jamestown, Lynne Wright of Lebanon, Stephen (Leigh) Wright of Cullowhee, NC, granddaughter, Jennifer (Dennis) Reagan of Thorntown, great-granddaughter, Cora Reagan and step-granddaughter Shannon (Tim) Fisher of Orlando, FL. Also surviving are 2 sisters, Wilma Revell of Lebanon and Norma (Charles) Rasmuson of Albuquerque, NM, brother Lloyd of Jamestown and sister-in-law, Kitty Hiland of Terre Haute. Preceding him in death were his parents and wife. Family and friends will gather Tuesday, May 31, 2016, 4:00-8:00 p.m. at Porter Funeral Home, Jamestown, IN with a Masonic service at 8:00 p.m. Services will held at the funeral home Wednesday, June 1 at 10:30 a.m. with Rev. David Wright officiating. Jerry will be laid to rest in Old Union Cemetery. In lieu of flowers, memorial contributions may be made to the First Baptist Church, 207 E. Washington St., Lebanon, IN 46052. You’re invited to visit the website, www.porterfuneralhome.us, where you may sign his online register and leave a personal message.