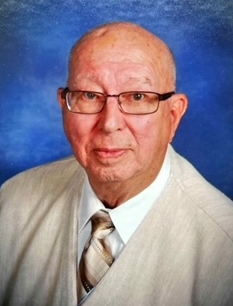 Cecil J. Hill, Jr. 91 went to be with the Lord on May 11, 2022. He was born July 4, 1930, in Elizabethtown, Kentucky to Cecil J. Hill and Hallie B. Sheroan. Shortly after his birth, his father, a professional soldier, brought the family to Fort Benjamin Harrison (in Indiana), where he was stationed.

Cecil Jr. was to grow up as a true Hoosier. The family moved into Indianapolis, where Cecil attended public schools, graduating from Arsenal Technical High School, and attended Butler University. He was also a graduate of the U.S. Army Adjutant General School.

After high school, he was employed by Blue Cross and Blue Shield of Indiana. He retired from the company after 39 years of service. Several of those years included his tenure as the company’s Director of Customer Services.

It was at Blue Cross and Blue Shield that he met his wife-to-be, Marguerite Alice Budrech. They married June 21, 1952 and shared 63 years together before her death in October 2015. He is survived by daughter, Pamela Jean (John) Leffler of Greenwood, IN, sister, Barbara Sue (Lowell) McGauhey of Bluffton, SC, grandson John (Sarah) Leffler and great-grandson, Jonathan Leffler of Plainfield, IN. He was preceded in death by his brother, Robert Stanley Hill and nephew, Greg Hill.

For nearly 20 years, Cecil served his country as member of Indian’s Army National Guard, enlisting as Private, he achieved the rank of Captain, concluding his service assigned as Assistant Adjutant General on the staff of the 38th Infantry Division, Indiana Army National Guard.

A memorial service will be 2:00pm Saturday, May 14th at Southport Presbyterian Church 7525 McFarland Blvd, Indianapolis, IN 46237 with a gathering from 1:30 to service time.