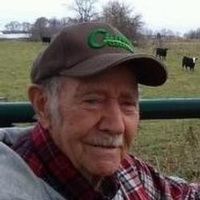 Charles Samuel “Sam” Mount, 90 years old of North Salem, IN, passed away Wednesday, November 16, 2016 at Danville Regional Rehab. He was born July 10, 1926 in North Salem, IN, the son of Guy and Hattie (Hayes) Mount. Sam served his country in the US Army during WWII. He was a member of the North Salem Christian Church and the Lions Club. He sang in the church choir and loved 30’s and 40’s music. He and Judy enjoyed travelling in the US and abroad and loved eating in the best, white table cloth restaurants. He worked as a teacher and principal for North Salem schools as well as farming. Sam was nominated by the Hendricks County Cattle Association as Cattleman of the Year. He was also awarded the Sagamore of Wabash award by Gov. Otis Bowen. He is survived by Judy Beers, his lady friend of 46 years, daughter, Becky Vest of Seymour, grandchildren, Saul Vest, Stacey Pack and Josh (Meagan) Vest and 2 great-grandchildren. He was preceded in death by his parents, a son, Guy Douglas Mount, sisters, Mary Dorothy Mount and Jenny Pearl Hertel and brother, James Elbert Mount. Family and friends will gather at the Porter Funeral Home, North Salem, IN, Monday, November 21, 2016 from 11 a.m. until time of service at 1 p.m. with Pastor John Gossett officiating. Sam will be laid to rest in the Fairview Cemetery, North Salem, Indiana. Online condolences may be made at www.porterfuneralhome.us