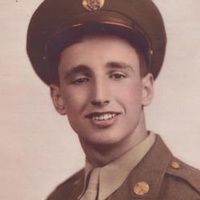 Donald D Hannis, 90 years old of Jamestown, IN, passed away Tuesday, May 6, 2014 in Parkwood Health Care following a brief illness. He was born September 3, 1923 in Westfield, IL, son of the late Dyer and Mildred Ross. Donald married Imagene Coy on October 4, 1975 in Frankfort, IN. She survives. He served his country in the US Army during World War II. He retired from Detroit Diesel Allison in 1981. Donald enjoyed playing golf, fishing and mushroom hunting. He loved nature and was a member of the Boone County Bluebird Society. He was also a member of the Jamestown American Legion. Surviving are his wife, Imagene Hannis, sons, Tom (Sarlota) Hannis of the Netherlands, Jim (Deanna) Hannis of Woodstock, IL, John Hannis of Jamestown and Rock (Tonia) Hannis of Jamestown, step-sons, James Coy of Lebanon and Ron Coy of Lebanon, half-sister, Kathleen (Richard) Wellman, 13 grandchildren and 15 great-grandchildren. He was preceded in death by step-son, Donnie Coy from Lebanon, IN. Family and friends will be received 11:00 a.m -2:00 p.m. Friday, May 9, 2014 at the Porter Funeral Home, Jamestown, Indiana. Services will follow at 2:00 p.m. Donald will be laid to rest in the Jamestown I.O.O.F. Cemetery. Memorial contributions may be made to the Wounded Warrior Project, P.O. Box 758517, Topeka, Kansas 66675 or your favorite Veterans Association. You are invited to visit our website, www.porterfuneralhome.us, where you may sign his online register and leave a personal message.