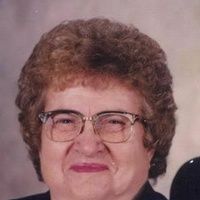 Dorothia Louise Jarrett, 88 of Avon, IN, passed away Friday, December 9, 2016. She was born December 18, 1927 in Lebanon, IN, daughter of the late Orville and Ruth (Ragsdale) Hancock. Dorothia attended Lizton Christian Church. She enjoyed sewing and gardening. She worked at Euliss Market in Lizton for several years. She is survived by her sons, James M (Patricia) Jarrett and Dale A Jarrett both of Avon, grandchildren, Michelle (Rob) Taylor of Columbus and Brian Jarrett of Avon, great-grandchildren, Ben MacKall, Kydal Jarrett and Robert McKee, sister, Laverne Castleman of Indianapolis and brothers, Leon Hancock of Brownsburg and Charles Hancock of Greenwood. She was preceded in death by her husband, Robert Jarrett, 1 brother and 2 sisters. Family and friends will gather Monday, December 12, 2016, 4:00-8:00 p.m. at the Porter Funeral Home, Jamestown, Indiana. Services will be held at the funeral home, Tuesday, December 13, 2016 at 12:00 p.m. with Pastor Scott Ailes officiating. Dorothia will be laid to rest in the Lizton K of P Cemetery. In lieu of flowers, memorial contributions may be made to Alzheimer’s Association, 50 E. 91st St. Suite 100, Indianapolis, IN 46240 Online condolences may be made at www.porterfuneralhome.us