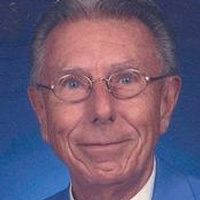 Duane R. Neet, 79, of Effingham, IL, passed away at 11:50 p.m. Tuesday, November 13, 2012, at St. John’s Hospital in Springfield, IL. Funeral services will be held at 11:00 a.m. Monday, November 19, 2012, at Centenary United Methodist Church in Effingham, IL. Visitation will be from 2:00 p.m. to 4:00 p.m. Sunday, November 18, 2012, at Johnson Funeral Home in Effingham, IL, followed by a 4:00 p.m. Masonic Rites service. In lieu of flowers, the family requests memorials may be made to Effingham Unit 40 Foundation – English Department, 2803 S. Banker, P.O. Box 130, Effingham, IL, 62401 or Centenary United Methodist Church – Music Department, Effingham, IL, 62401. Online condolences may be expressed at www.johnsonandsonsfh.com Duane was born on February 8, 1933, in Jamestown, IN, the son of Parke R. and Bertha B. (Clark) Neet. He married Patricia A. Porter on September 4, 1955, at the Wabash College Chapel in Crawfordsville, IN, and she survives. Duane was a veteran of the United States Army, where he served as the organist for the Post at Fort Hood, TX. He was a current member of Centenary United Methodist Church (CUMC) in Effingham, IL, where he served as an organist. Prior to being a member at CUMC, he was a member and organist at the First Presbyterian Church in Effingham, IL. Duane was a member of Effingham Masonic Lodge 149. He was a member and organist of Danville Scottish Rites. He was a member of the Sons American Revolution (S.A.R.) where he held the office of the secretary treasurer of the state chapter and had received many honors. For many years, Duane taught English at Effingham High School and developed the pre-college rhetoric program for gifted students. Upon retirement, he held the position of Assistant Superintendent in charge of Curriculum and Development. Duane is survived by his wife, Pat Neet of Effingham, IL; daughter, Deborah (Kevin) Neet West of Ashland, MO; son, Bradley D. Neet of Hastings, NE; grandchildren, Brian (Genese) Marshall, Jessica (Michael) Fowler, Lauren Neet, and Breanna Neet; great-grandchildren, Kayla Marshall, Jacob Marshall, and Tessa Fowler; sister, Marlene (Gene) Miller of Crawfordsville, IN; brother-in-law, Robert (Barbara) Porter of North Salem, IN; and nieces and nephews. He was preceded in death by his parents.