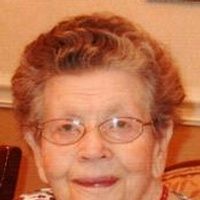 Eleanor Jeanette Troth Mitchell passed away on Jan. 11, 2014. Born Dec. 9, 1921 near Spencer, IN, she was the daughter of the late Gail Lial Troth and Mary Edith Straley Troth. She graduated from Dover High School in 1940 and married Alva F. Mitchell who survives. They would have celebrated 68 years of marriage on Feb. 5 of this year. Jeanette was an active member of Jamestown Christian Church for many years and was later a member of New Brunswick Church of Christ. She is preceded in death by her parents, her brother, Howard W. Troth, and a nephew, Gary Troth. Survivors include daughters, Diana (Jim) Stump of Danville, IN; Mary Ellen (Stephen) Elliott of Natchitoches, LA; and Rita (William) Keaton of near Rushville, IN; and 7 grandchildren and 16 great-grandchildren. Visitation will be at Porter Funeral Home in Jamestown, IN from 5 to 8 p.m. on Friday, Jan. 17, 2014. Services will be at 10 a.m. on Saturday, Jan. 18, at the funeral home followed by burial in Old Union Cemetery. In lieu of flowers a memorial contribution may be made to a charity of your choice. Online condolences may be made at www.porterfuneralhome.us