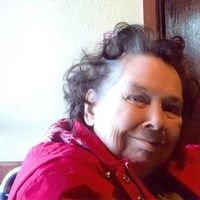 Esther Robinson, 71, passed away Sunday morning, May 29, 2016 at Countryside Meadows in Avon. Esther was a shipping laborer at American Art Clay for 4 years. Esther enjoyed playing bingo, flower gardening and spending time with her family. She was also a member of the Brownsburg Christian Church. Esther Robinson was born June 26, 1944 to Sammie and Lizzie (Gregory) Minton. She married James S. Robinson in 1978. She is survived by her sons Lee Minton (Shera) of Brownsburg, James Anderson (Janell) of Danville, and Samuel Anderson (Leah) of Lawrence, brothers Ford Minton (Nancy) of Brownsburg, Gilbert Minton (Elaine) of Plainfield, and Carl Minton (Carol) of Plainfield, sisters Hester Hunt (Junior) of Indianapolis, Patty Burdine (Wayne) of Roachdale, and Kissie Wheat. Esther is also survived by her 6 grandchildren and 6 great-grandchildren. Family and friends will gather Wednesday, June 1, 2016, 2:00 p.m. until time of service at 4:00 p.m. at Porter Funeral Home in Jamestown, Indiana. Esther will be laid to rest at IOOF cemetery in Jamestown, Indiana. You’re invited to visit the website, www.porterfuneralhome.us, where you may sign her online register and leave a personal message.