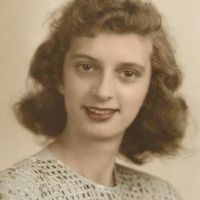 Evelyn Elizabeth Eberwein, also known as “Mimi”, passed away peacefully on January 18, 2017 at the age of 88 at Hendricks Regional Health Hospital in Danville, Indiana. Evelyn was born in Indianapolis on April 25, 1928 to Willard and Carrie Tharp. She was an excellent student and graduated from George Washington High School in 1946. Although she was raised in Indianapolis, she moved to Lebanon in 1948 after marrying Andrew J. Eberwein, who was a farmer. Evelyn and Andrew later moved to Roachdale, where they raised their children and enjoyed the farm life then moved to Bainbridge where they resided for 40 years. She was a devoted wife, mother, and grandmother who especially enjoyed the company of friends, including her long-time friend Thelma Hubble. Evelyn most recently resided at Ivy Trace assisted living facility in Danville where she quickly made new friends and enjoyed playing games together such as bingo. Evelyn was preceded in death by her husband Andrew Eberwein, sons Donny and Michael Eberwein, and siblings Virgil Tharp, Charlotte Gunter, and Leroy Tharp. She is survived by her daughter Kathy Morrical, granddaughters Michele Morrical and Melissa Dionne, grandson Shawn Eberwein, great-grandchildren Makayla Eberwein, Thomas Hygema, Julia Hygema, Braylon Eberwein and Brielle Eberwein and great-great granddaughter Ava Eberwein. Family and friends will gather Sunday, January 22, 2017, 3:00-6:00 p.m. at the Porter Funeral Home, North Salem, IN. Services will be Monday, January 23 at 11:00 a.m. at the funeral home. Evelyn will be laid to rest in the Roachdale Cemetery, Roachdale, IN. Online condolences may be made at www.porterfuneralhome.us