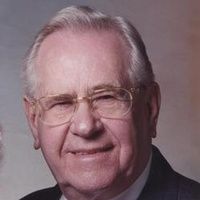 Gene R. Miller of Crawfordsville, IN passed away June 5, 2016 at Wellbrooke of Crawfordsville. Mr. Miller was born in Jamestown, IN to Arch and Hazel (Rains) Miller on January 19, 1924. On September 3, 1948, he married Marlene M. Miller in Zionsville, IN by his Army chaplain. She preceded him in death. He was also preceded in death by his brother-in-law, Duane Neet. Gene is survived by his sister-in-law, Patricia (Porter) Neet, nephew, Brad (Kelli) Neet and family and niece, Debbie (Kevin) West and family. He graduated from Jamestown High School in 1942 and worked for the Citizens State Bank until entering the Armed Services during WWII where he served in the Air Corp in the Eastern Theater of Operations. After returning home he worked as an accountant for Standard Oil Co. in Indianapolis for a few years before farming full time on the family farms, from which he retired in 1976. He was also part owner-operator of the Jewel Theater in Jamestown. His memberships included the Jamestown Christian Church, the International Association of R. S. Prussia Collectors, the Jamestown Hazelrigg Lodge 200 F. & M., where he was a 50 year member, and the Jamestown American Legion Post #395. Cremation was chosen and there will be no visitation. Arrangements were entrusted to Porter Funeral Home, Jamestown, IN. A memorial will be held for both Gene and Marlene at a later date. In lieu of flowers, donations may be made to the charity of the donor’s choice or to the Animal Welfare League of Montgomery Co., 1104 Big Four Arch Rd., Crawfordsville, IN 47933. You are invited to visit the website, www.porterfuneralhome.us, where you may sign his online register and leave a personal message.