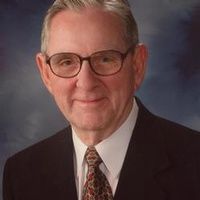 Kenneth Gene Turner, 88 years old of New Ross, IN, passed away Sunday, July 27, 2014. He was born November 23, 1925 in New Ross, IN, son of the late Alva and Hazel Bradley Turner. Gene married Waltraut Vice Strese on September 23, 1953. Gene was a member of the New Ross United Methodist Church where he served as a Lay speaker and Sunday school teacher. He was a former president of the New Ross town board and served on the Walnut township advisory board. He was a member of the Ladoga Book Club, the New Ross Conservation Club, the Masonic Lodge (Hazelrigg #200 Jamestown), the Robert Turner Legion Post 427 (New Ross) where he served as Post Commander and Chaplain. He later became a member of the Crawfordsville Post 72. He had a mowing business with his grandson Brandon, volunteered as a Red Coat at St. Clare Medical Center, and at the New Ross Library. He worked for Allison Transmission (GM) before he retired in 1986. He is survived by his daughter Rosemarie (Mark) Hutcheson, ten grandchildren, nine great-grandchildren, two nieces, and a nephew. He was preceded in death by his wife, Waltraut, son, Marcus, his sisters, (Naomi and Evelyn Rosebud), his brother Robert and 2 great grandchildren (Zachary and Kolton Turner) . Family and friends will gather Saturday, August 2, 2014, 12:00-2:00 p.m. at the New Ross United Methodist Church, New Ross, IN. Service will follow at 2:00 p.m. in the church with Pastor Tami Mussche officiating. Gene will be laid to rest in the New Ross Cemetery. Memorials may be made to the New Ross United Methodist Church, PO Box 95, New Ross, IN 47968. You may visit our website, www.porterfuneralhome.us, to sign his online register and leave a personal message.