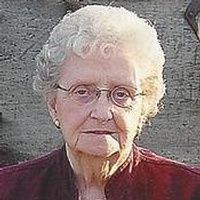 Helen Louise Bronaugh, 86 years old of New Ross, IN, died Thursday, February 21, 2013 at her daughter’s home. She was born May 22, 1926 in Ladoga, IN, daughter of the late Winfred Lee and Anita Robbins Vice. She graduated from Ladoga High School in 1944. She went on to attend Purdue where she studied psychology. She worked at Custonm Farm Service for 9 1/2 years as a secretary and bookkeeper. Helen married Charles Bronaugh on September 15, 1944. He preceded her in death in 1994. She was a member of the New Ross Methodist Church where she held many offices, the Ladoga and Roachdale Eastern Star, the Home Builds Home Ec Club, the Historical Society, The Montgomery County Pioneers, the Wisk Club for over 50 years and the Polyannas of the New Ross Methodist Church. Surviving are daughter, Cheryl (Dave) McClaskey of New Ross, grandsons, Jeff (Kerrie) McClaskey of Crawfordsville and Eric (Julie) McClaskey of New Ross, great-grandchildren, Lauren, Caroline Helen, Grace, Jett, Seth and Peri, brothers, Chet Vice of Ladoga, Raymond Vice of Crawfordsville, and Harold “Ike” Vice of Astoria, OR, sisters, Ruth Moore of Crawfordsville, and Barbara McKinze of Danville, and several nieces and nephews. She was preceded in death by her husband, sisters, Martha Cornett and Winnie Golladay, and brothers, Robert Vice, Kenny Vice and Virgal Vice. Friends and family will call Sunday, February 24, 2013, 4:00-8:00 p.m. at Porter Funeral Home, Jamestown, Indiana. Services will be held at the funeral home, Monday, February 25 at 11:00 a.m. with Pastor Rodger Ward officiating. Burial will follow in the New Ross Cemetery. Online condolences may be made at www.porterfuneralhome.us