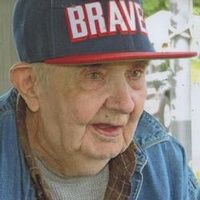 James “Pappy” Hulen Raines, 88, of Advance, IN, passed away Thursday, September 8, 2016 in St. Vincent Hospice. He was born January 20, 1928 in Coles County, IL, son of the late James Sidney and Ada (Davis) Raines. James was an avid Atlanta Braves fan and loved watching his kids and grandkids play ball. He also enjoyed playing horseshoes, gardening, traveling to Tennessee and spending time with his family. He served his country in both the Navy and the Army. He served in the US Navy during WWII and then in the US Army during the Korean War. He is survived by his son, Kenny Raines (Rhonda Copeland) of TN, daughters, Brenda Benge of Advance, Jackie (Tony) Covington of Advance and Carla (Mike) McCandless of Crawfordsville, brothers, Delbert (Betty) Raines of Marietta, GA, and G. F. Raines of Gainesboro, TN, Grandchildren, Rachel Wilkerson (Brad Rye), Sarah (Jason) Meek, Chad Benge (Jessica Scott), Casey Benge, Cory (Kimberly) Benge, Kelli (Nathan) Litza, Ashley (Chris) Harris, Robert Niehaus, Tyler Covington, Mackenzie Covington, Logan McCandless and Haley McCandless, 14 great-grandchildren and many special nieces, nephews and cousins. He was preceded in death by his wife, Alta Marie (Williams) Raines and sister, Helen Apple. Family and friends will gather Monday, September 12, 2016, 4:00-8:00 p.m. at the Advance Community Christian Church, Advance, IN. Services will be held at the church, Tuesday, September 13 at 11:00 a.m. with Pastor Steve Vitaniemi officiating. James will be laid to rest in the Jamestown I.O.O.F. Cemetery. Online condolences may be made at www.porterfuneralhome.us