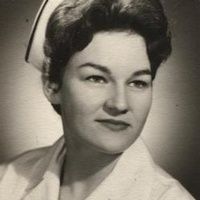 Geneva Janice (Jan) Wright Davidson passed peacefully under the care of her children on Monday, April 28, 2014. She was born on May 4, 1940 to Carl and Orpha Wright in Johnson, IN in Gibson County. Janice graduated from Huntingburg High School in 1958. One who realized at a young age her purpose in life, she pursued a career in nursing, attending Deaconess School of Nursing in Evansville, IN, where she received her RN degree. The majority of her career was served at Hendricks Regional Health where she worked for 39 years, retiring in November 2002. On November 11, 1961 she married Darrell Keith Davidson of North Salem, IN. They were married for 39 years prior to Darrell’s passing in December 2000. Together they had 4 children. Preceding Janice in death were her parents, Carl & Orpha Wright, her husband, Darrell Davidson, siblings, Stanley Wright, Bernard Wright and Joann Lemcheuler and son-in-law, Ted Lieske. She is survived by children, Doug Davidson (Ann Sterling), Kelly Lieske (Greg Kohr), Lee Alice (Martin) Summers and Chad Davidson, all of North Salem, IN, siblings, Darlene (Doc) Power of North Salem, IN and Forest (Carol) Wright of Lake City, FL grandchildren, Jen Davidson, Jason (Melissa) Summers, Lindsay Davidson, and Wyatt and Allison Lieske and great-grandchildren, W. Wyatt and Martin Summers. Well done good and faithful servant! Family and friends will gather Sunday, May 4, 2014 from 2:00-6:00 p.m. at the Porter Funeral Home, North Sale, IN. In lieu of flowers, contributions may be made to The Gathering Together, 147 N Center Street, Plainfield, IN 46168. The family would like to express their heartfelt thanks to Rita Fiorentino, Abby Homoya and the staff of Horizons Hospice. You are invited to visit our website, www.porterfuneralhome.us, where you may sign her online register and leave a personal message.