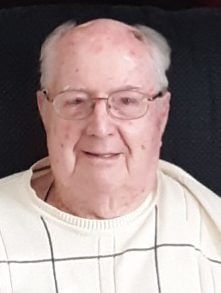 John Robert “Bob” Banks, age 96, of Greenwood, passed away May 5, 2022. He was born in Indianapolis on May 22, 1925 to John and Irene Banks. He was an accomplished athlete in cross country, track, and basketball at Thomas Carr Howe High School. He proudly served his country in the United States Navy, serving in WWII. He worked in education as a teacher for Mt. Comfort Schools, Southport Middle School, and New Palestine High School, before taking a position as a guidance counselor at Perry Meridian High School. He was the 1957 Assistant Coach for the New Palestine High School Basketball Sectional Championship Team.

He married Rowena Southers, and together they had one daughter who survives: Rebecca (Tim) Sullivan; along with his grandchildren: Rob Sullivan, and Scott (April) Sullivan; and great-grandchildren: Quentin, Megan, Hannah, and Alexandra.

After Rowena’s death he married Shirley Banks. She also preceded him in death, along with her son: Joe Rader. Bob is survived by Shirley’s children: Peggy Bush, Jim Rader, and her daughter-in-law: Jo Rader; as well as her grandchildren and great-grandchildren.

He is also preceded in death by his sister: Lucille; and brothers: Ronnie, Jimmy, and Richard.

Arrangements are in the care of Singleton and St. Pierre Funeral & Cremation Services.