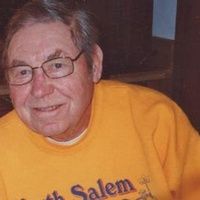 Mr. Leonard E. Basham, 88, of North Salem, IN, passed away Saturday, February 27, 2016 at Hendricks Regional Health in Danville. Leonard was born November 3, 1927 in Huff, KY, a son of the now late Clifford and Sophie (White) Basham. He married Dorothy Duncan in Elnora, IN. She survives. Leonard graduated from North Salem High School. He worked for Allison Transmission for 30 years as an inspector and retired from there in 1982. Leonard then opened Basham Antiques in North Salem and owned and operated it for 40 years. He was a member of the Pittsboro Masonic Lodge and the American Legion in Danville.Leonard enjoyed antiquing, watching sports, and the Old Fashion Days. He especially enjoyed time spent with his grandchildren. Leonard was affectionately known as the “kissing bandit.” He is survived by his sons Jim Basham of North Salem and Mark (Teresa) Basham of North Salem; his sister Delores (Joe) Hayes of Crawfordsville; his grandchildren Gina L. Basham of Speedway, Mick T. Basham of New Ross, Lucas Murphy Basham of Casper, WY, Aaron W. Basham of Brownsburg, and Kevin L. (LaRonda T.) Basham of North Salem; his great-grandchildren Hunter Ward, Christian Ward, Brandon Ward, Tyler Basham, Landon Basham, Makayla Basham, Austin Basham, Blake Basham, Sydney Basham, and Wade Basham; and several nieces and nephews. Leonard was preceded in death by his parents Clifford and Sophie Basham, his son Terry L. Basham, and his siblings Lonard Basham, Juanita Rhyne, Madonna Gentry, and Landon Basham. Family and friends will gather Wednesday, March 2, 2016 from 10 a.m. until time of services at 1 p.m. in the North Salem Christian Church, with the reverend John Gossett officiating. Leonard will be laid to rest at Fairveiw Cemetery in North Salem. You’re invited to visit the website, www.porterfuneralhome.us, where you may sign his online register and leave a personal message.