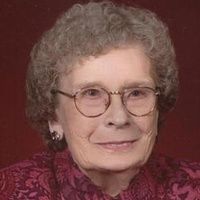 Nannie Louise Gossett Roush, 95 years old of North Salem, IN, passed away Thursday, December 31, 2015 in Danville Regional Rehab. She was born March 31, 1920 in New Ross, IN, daughter of the late Thomas Ernest and America Frances Emerine Huckstep Trammel. She was a member of the North Salem Christian Church where she played the piano and organ, was a Sunday School teacher and a board member. Louise worked for the United States Department of Agriculture, was a bookkeeper for Moreland Farm Service and was the Clerk-Treasurer for the town of North Salem. Surviving are her daughters, Anna Louise (Gordon) McIntyre, Martha Jane (Dick) Buckingham and Barbara Jo (Wayne) Reynolds, sons, John David (Sandy) Gossett, and James Edwin (Vickie) Gossett, 12 grandchildren, 21 great-grandchildren, 4 step-children and 2 step-grandchildren. Family and friends will gather Sunday, January 3, 2016, 4:00-8:00 p.m. at the North Salem Christian Church, 6 N. California Street, North Salem. Services will be Monday, January 4, 2016 at the church at 10:00 a.m. with Pastor John Gossett officiating. Louise will be laid to rest in the Fairview Cemetery, North Salem. You may visit our website, www.porterfuneralhome.us, to sign her online register and leave a personal message.