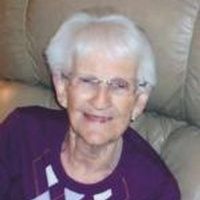 Margaret Louise Jackson Sparkmon, 90 years old of Indianapolis, IN, died Friday, February 4, 2011 in Avon, IN. She was born May 13, 1920 in Indianapolis, IN, daughter of the late James and Vey Huddleston Cordray. She was a member of Chapel Hill United Methodist Church. She was a homemaker. She also held positions at Lake Central Airlines, LS Ayres and Indiana State Police. She was an avid Atlanta Braves fan and a member of a bowling league. Surviving are sons, James J (Lynn) Jackson of Avon, Gerald R (Jynell) Jackson, Douglas E (Sharon) Jackson of Westfield, Bruce D (Hisae) Jackson of Chiba, Japan, daughters, Julia A (Doug) Lines of New Port Richey, FL and Deborah K (Joe) Huffman of Avon, 15 grandchildren, 23 great-grandchildren and 2 great great-grandchildren. She was preceded in death by her husbands, Donald W. Jackson and John Sparkmon and brother, Dale Cordray. Friends will be received Wednesday, February 9, 2011, 11:00 a.m.-2:00 p.m. at the Porter Funeral Home, North Salem, Indiana. Service will follow at 2:00 p.m. with Rev. Michael Biggs officiating. Interment will follow in the Fairview Cemetery. In lieu of flowers memorial contributions may be made to the American Cancer Society, 5635 W. 96th Street, Suite 100, Indianapolis, IN 46278 or Chapel Hill United Methodist Church, 963 N Girls School, Indianapolis, IN 46214-3669. Online condolences may be made at www.porterfuneralhome.us