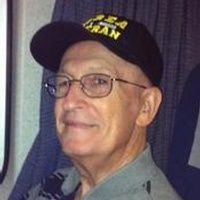 Melvin O Routh, 76 years old of New Ross, IN, died Tuesday, May 1, 2012 in Homewood Health Campus. He was born August 7, 1935 in New Ross, Indiana, son of the late Raymond O. and Viola Richardson Routh. Melvin served in the US Air Force as a radio operator in Germany during the Korean War. He married Martha Maxwell on May 28, 1970. She survives. He was a member of the Samson Air Force Base Veteran’s Association and the American Legion. He retired from Raybestos where he was an electrician. Surviving, in addition to his wife, are sons, Dr. Charles (Janine) Routh, and Michael (Kimberly) Routh, daughters, Lori Routh and Stacy Routh, 6 grandchildren and 2 great-grandchildren. He was preceded in death by his sister, Marilyn “Tootie” Dossett. Friends will be received Saturday, May 5, 2012, 12 noon – 2:00 p.m at the Porter Funeral Home, Jamestown, Indiana. Graveside service will follow at 2:30 p.m. at the New Ross Cemetery with Pastor Rodger Ward officiating. Online condolences may be made at www.porterfuneralhome.us