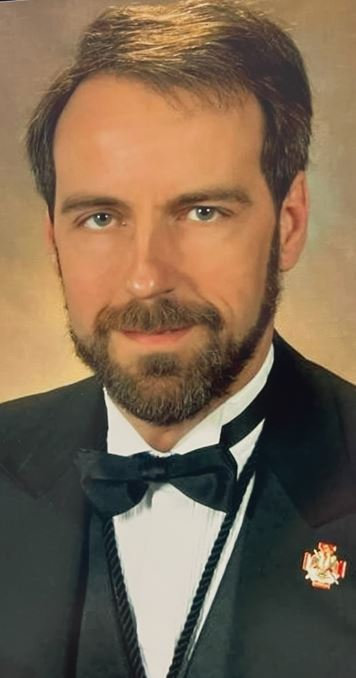 Philip D. Herthel, 57, passed away Wednesday afternoon, September 14, 2022. He was a lifelong resident of Shelbyville.
He was born August 16, 1965 in Shelbyville to Dale E. and Miriam Ann (Eberhart) Herthel. Survivors include three cousins, Sean Eberhart, David (Michelle) Eberhart, and Debra Eberhart; aunt, Donna Eberhart; a nephew, Ty Eberhart; and his cat, Baldur.
He was preceded in death by his parents; uncles, John C. Eberhart and Charles B. Eberhart; and aunt, Claudine Eberhart.
Phil was a 1983 graduate of Shelbyville High School, where he as an active member of the band playing the trombone. He was a 1987 graduate of Purdue University, participating in the marching band, pep band, and jazz band.
Since he was a youth, Phil was active in the Masonic fraternity. He was active in DeMolay, joining the Hacker Chapter in 1980. He received his Order of Chevalier in 1985, and the Legion of Honor award in 2002.
He was a member of Englewood Masonic Lodge #715 F. & A.M., Morristown Masonic Lodge #193, and Century Lodge #764 F. & A.M. He was a Past Master at Morristown and Century Lodges.
Phil was and active member of the York Rite. He was a member of the Shelby County York Rite; High Priest of Shelby Chapter; Illustrious Master, Steffey Council; Eminent Commander, Baldwin Commandry; and served as Most Excellent Grand High Priest for the Indiana in 2010-2011. He received the Grand Knight York Cross of Honor in 2012.
He was very passionate member of the Indianapolis Valley of the Scottish Rite since 1986. He received his Meritorious Service Award (MSA) in 2000, and became the Commander-In-Chief of the Indiana Consistory in 2015. He received the Honorary Thirty-Third Degree in 2017 as a member of the Supreme Council.
Phil was a member of the Murat Shrine, and is a Past President of the DeMolay and NexGen Units.
He served in several other appendant bodies, including the Order of the Eastern Star, Sahara Grotto, Allied Masonic Degrees, Royal Order of Scotland, York Rite College, and Council of Knights York Cross of Honor.
Calling will take place from 6-7PM, Tuesday, September 20, at the Scottish Rite Cathedral, 650 N. Meridian Street, Indianapolis, with a Masonic services to follow at 7PM.
Memorial contributions are suggested to the Scottish Rite Cathedral Foundation, 650 N. Meridian Street, Indianapolis, IN 46204, Compass Park Masonic Home, 690 State Street, Franklin, IN 46131, or to the Purdue University College of Agriculture, 615 W. State Street, West Lafayette, IN 47907.
You are invited to read Phil’s online obituary at www.stpierrefamilyfuneral.com, where you may sign the online register book or leave a condolence for the family.
Arrangements entrusted to Wilson St.Pierre Funeral Service & Crematory.