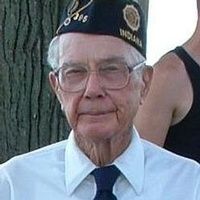 Ralph Faye Beam, 97, of Lizton passed away on Wednesday, May 18, 2016 at Homewood Health Campus in Lebanon. Ralph was born on April 28, 1919, one of nine children born to Walter and Vernia (McCormick) Beam at Morton, Indiana. He was educated at the New Maysville and Bainbridge Indiana schools and graduated from Bainbridge High School. He then attended Indiana Central Business College. He married Katherine (Scobee) Beam on September 20, 1941. She preceded him in death in 2007. Ralph Faye Beam was proud to serve in the U.S. Army and was inducted in November, 1941 and sent to Fort Benjamin Harrison, and discharged November 10, 1945 at Camp Atterbury. He served in the European Theatre from February 10, 1944 to September 15, 1945 as a Chief Warrant Officer with the 44th armored infantry 6th Armored Division. Ralph and Katherine (Scobee) Beam resided in Indianapolis until they moved to Jamestown in 1954. They then purchased the Jamestown Lumber Company and resided in Jamestown, IN for over 50 years until purchasing their dream home in Lizton, IN. Ralph was an active general contractor up until the age of 95 building several homes and renovating several buildings in the Jamestown area. He and his wife also sponsored the Ralph and Katherine Beam scholarship fund at Western Boone Jr./Sr. High School. He was a member of the American Legion Post 395, Hazelrigg Lodge 200, Scottish Rite and United Methodist Church of Jamestown. Surviving are their three sons, Walter Beam (Janet), Donald Beam (Estelle), Richard Beam (Ginger) and several grandchildren and great-grandchildren. Funeral services are scheduled at Porter Funeral Home in Jamestown. Visitation will be Saturday, May 21, 2016, 3:00-7:00 p.m. and again Sunday, May 22, 3:00-5:00 p.m. with services on Sunday at 5:00 p.m. with Reverend William Byrd officiating. In lieu of flowers, donations may be made to the American Legion Post 395, Hazelrigg Lodge 200 or the Jamestown United Methodist Church. You’re invited to visit the website, www.porterfuneralhome.us, where you may sign his online register and leave a personal message.