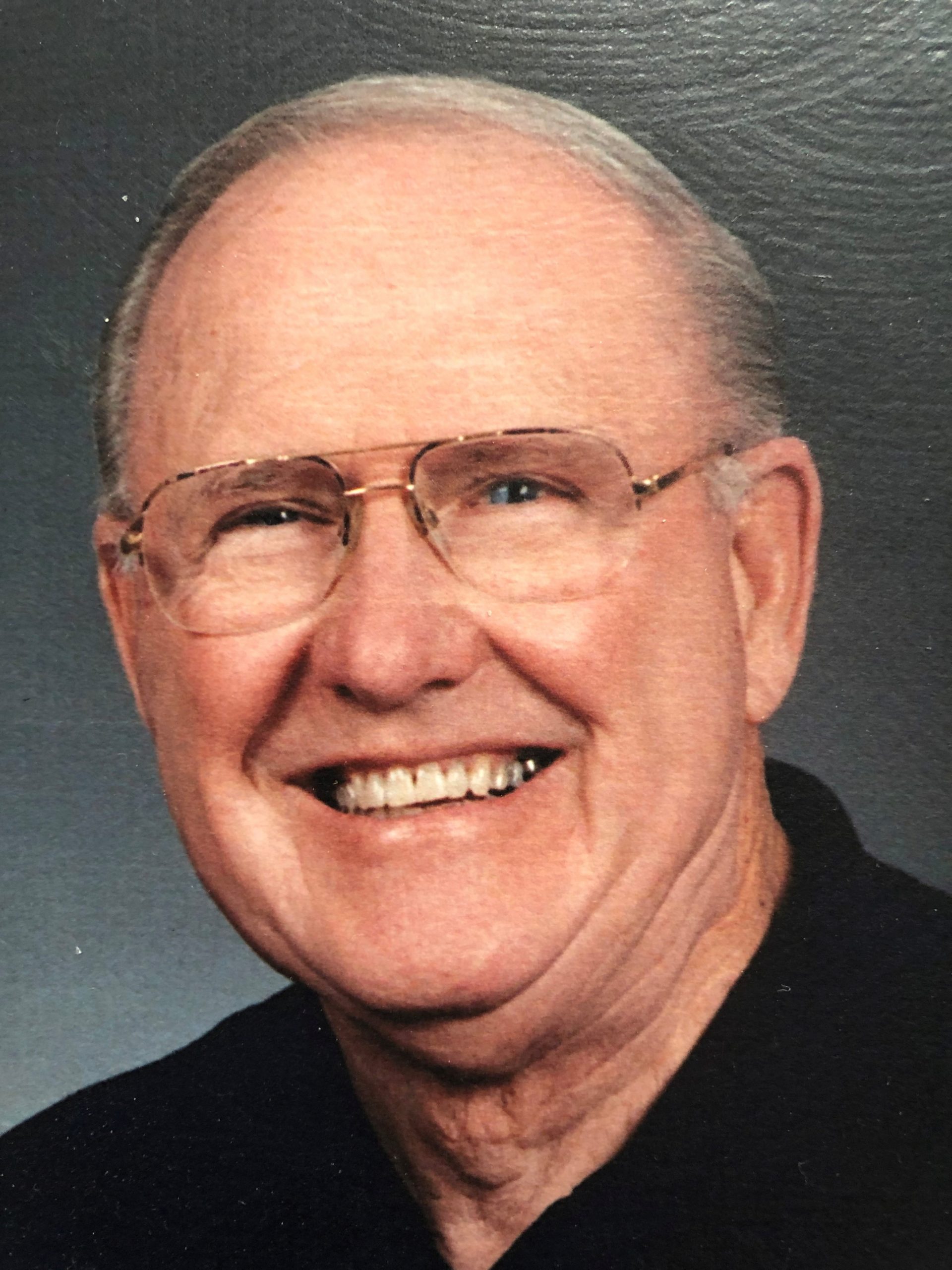 Raymond C. Bertram, Jr., 92, a lifelong resident of Indianapolis’s southside, passed away on August 1, 2022. He was the oldest child of Raymond C. Bertram, Sr. and Ruth (Bingham) Bertram, born on May 7, 1930.
Ray was raised during the Great Depression and managed to meet his many home obligations while still excelling at the sport that he loved…basketball. He played hoops for Southport High School all four years and was named to the All-Sectional team while leading the Cardinals to the 1947 Indianapolis Sectional Championship. He lettered in both basketball and football and few athletes at Southport rivaled his career at that time.
As a result of his basketball skills, Ray was offered a scholarship to play at Memphis State. He started on the varsity team as a freshman, however, he suffered an injury during this same year that resulted in blindness in his left eye. At that time, there were no guaranteed athletic scholarships so his time at Memphis came to an end. Not to be deterred, he returned to Indianapolis and began to practice with the Butler Bulldogs. However, Coach Tony Hinkle soon recommended that to ensure the safety to his one good eye, Ray should discontinue playing. Ray heeded his coach’s advice, but that did not put a halt to his dedication to the game or to his alma mater, Southport.
For the rest of his life, Ray continued to support and represent Southport as an alumnus involved in many programs that gave back to the school. For his performance both on the court and as a philanthropist, he was inducted into the Southport High School Athletic Wall of Fame in 2013.
Upon returning to Indianapolis from Memphis, Ray married Patricia Miller and together they had three children. Though their marriage ended in divorce, his devotion to and love for his children remained strong. He secured a job with Peerless Furnace Company where he was a top salesperson for 18 years and then joined Duncan Supply where he was honored as their 1993 Salesman of the Year. He remained with Duncan as a loyal and valued employee until his retirement.
On March 29, 1969, Ray married Lucinda ‘Cindy’ Orme at Southport Presbyterian Church which would remain his home church for the remainder of his life. Together they added one son to their blended family and shared 53 years of marriage until his death.
Ray dedicated much of his time to Southport as an alumnus and fan. He was a fixture in the bleachers, cheering on his beloved Cardinals. It has been said that Ray has likely seen more games at the Southport Fieldhouse than anyone else. In 1991, he became a charter member of the Southport High School Alumni Association and was a founding member of the SHSAA Golf Outing. At formation, the Alumni Association utilized the golf outing to raise money for scholarships for SHS graduates. To date, it has provided over $1.2 million in scholarships to graduating seniors of his dear alma mater. In 2021, in honor of their service, the golf outing was renamed the “Ray and Cindy Bertram Southport Alumni Association Golf Outing”.
Over the years, Ray had a passion for serving his community and giving back to others. He was a member and former President of the Southside Indianapolis Kiwanis Club and the recipient of the Kiwanis’ President Award. He co-founded the Perry Township Athletics, Inc. (PTAI) and Perry Township Families in Action. He was a member of the Perry Township Seniors Citizens Board of Directors, and even into his late 80’s, would personally provide transportation to those needing help getting to doctor visits. He was a long-time volunteer at St. Francis hospital and coached basketball, baseball, and football through PTAI, Baxter YMCA and the Southport Little League.
Ray loved to serve the Lord. He was one of the longest serving members of the Southport Presbyterian Church, holding countless positions including Elder, Deacon, Trustee, Pastoral Nominating Committee, Building Committee, and the church choir.
Ray is survived by his wife of 53 years, Cindy of Indianapolis, his brother David of Greenwood, his children, Lisa Stone (John) of Scottsdale AZ, Joseph (Lucela) of Indianapolis, Robert (Tracy) of Lafayette Indiana and Jon (Melissa) of West Chester Ohio. He was also blessed with grandchildren, Andrew Bertram, Paige Bertram, Tyler Stone, Chase Stone, Olivia Reed, Savannah Bertram, Alex Bertram, Jenny Bertram, and Katie Bertram. His great grandchildren include Cameron Bertram, Hudson Gomez, Milania Gomez, Sophia Bertram, Crew Gomez, Madeline Stone, Jack Stone, Amelia Bertram, and Calvin Stone.
Calling will take place from 5-7PM on Friday, August 12, 2022, at Southport Presbyterian Church (7525 McFarland Blvd, Indianapolis, IN 46237) and a Celebration of Life service will follow at 7PM. Friends are advised to be aware of street closures on Emerson Avenue when going to the services.
Memorial contributions are suggested to the Southport High School Alumni Association, c/o Scholarship Program, Attn: Brent Bockelman (971 Banta Road, Indianapolis, IN 46227…please include “Ray Bertram” in the memo line), or to the Southport Presbyterian Church (7525 McFarland Blvd, Indianapolis, IN 46237).
You are invited to visit www.stpierrefamilyfuneral.com, where you may sign the online register book or leave a condolence for the family. Arrangements have been entrusted to Singleton & St. Pierre Funeral and Cremation Services.