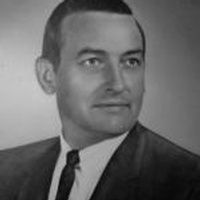 Reverend Raymond Rader, former pastor of the First Baptist Church of Lizton, passed away on December 9, 2010 at Veterans Administration Hospital after a prolonged illness. He was 84. Raymond was born in Elnora, Indiana on November 18, 1926 to John and Flossie Rader. One of nine children he grew up on a farm and like many other Hoosiers played basketball when he wasn’t farming. Raymond went on to star at Switz City High School averaging half the teams points his senior year and was one of the first players in the Wabash Valley to use the one handed shot. His team made it to the regional finals before losing by one point to Martinsville in 1944. After high school Raymond joined the Navy, was assigned to the destroyer USS Caldwell, and was deployed in the Pacific theater as a gunners mate late in the war. Returning home from the war, he married his high school sweetheart, Ruth Miller to whom he remained married until his death 64 years later. Raymond learned the art of furniture finishing at several early jobs and was employed by L.S. Ayres for many years doing custom work for their decorating department. In later years, Raymond became a master carpenter applying his considerable talent to building custom homes. Following his spiritual conversion at the age of thirty eight he attended the Indiana Bible College located in Indianapolis and graduated cum laude with a baccalaureate degree. While still in school he became pastor of the First Baptist Church of Lizton with a congregation of thirty. The church membership soon grew and motivated by a commitment to service, undertook construction of a new church building. In its new sanctuary the church grew to over 300 members. Reverend Rader went on to pastor congregations in Coatesville, North Salem, and Moran. Reverend Rader is survived by his wife Ruth and sons Mike and Mark; brothers Edwin Rader and Dennis Rader; grandsons Aaron Rader, Anson Rader, John Klein and Thomas Klein. Funeral arrangements are Monday, December 13, 2010 at 10:00 a.m. at Porter Funeral Home, Jamestown, IN. Visitation will be Sunday, December 12, from 1:00-3:00 p.m. Burial will be at the K of P Cemetery in Lizton. Online condolences may be made at www.robertporterfuneralhome.com