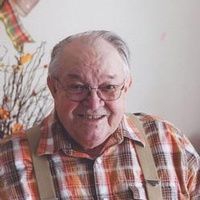 Richard Kent McClaine, 85 of Crawfordsville, IN, passed away Sunday, July 31, 2016 in St. Vincent Hospital. He was born March 26, 1931 in Crawfordsville, IN, son of Ezra Breckenridge and Iris (Mitcheltree) McClaine. Richard married Shirley Richardson on August 9, 1953 at her parents’ home in Milligan, Indiana. He was a member of the New Ross United Methodist Church, a 50+ year member of the Moose Lodge and past member of the Montgomery County Pioneer Club, the Pork Producers and the Conservation Club. He was an avid watcher of Roy Rogers and Andy Griffith shows. He was a lifelong farmer, retiring in 1995. During that time he also worked 10 years for the Montgomery County Highway. He also worked for the Indiana State Dept. of Transportation and Terra Products. He is survived by his daughters, Kathy Lynn (John) Evans and Kimberly Ann (Greg) Lanam, Shirley’s sister, who they raised as one of their daughters, Pat (Joe) Stemick, grandchildren, Krista Servies, Collin Lanam, Tiffany Evans and Matthew Evans, great-grandchild, Halle Elliott and several nieces and nephews. He was preceded in death by his parents, wife, Shirley McClaine, brother, James McClaine, sister, Eloise McClaine and half-brothers, Jack McClaine and Jerry McClaine. Family and friends will gather Wednesday, August 3, 2016 4:00-8:00 p.m. at the Porter Funeral Home, Jamestown, Indiana. Services will be held at the funeral home, Thursday, August 4, 2016 at 11:00 a.m. Richard will be laid to rest in the New Ross Cemetery. Memorial contributions may be made to the Montgomery County 4H, c/o Krista Servies, 205 N. Grace Avenue, Crawfordsville, IN 47933. Online condolences may be made at porterfuneralhome.us.