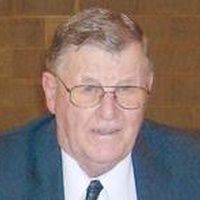 On September 10, 1922, Robert “Bob” Evan Riner was born to Okla and Ruie Broshar Riner. Bob married Helen Knox Riner on September 10, 1942, who died on August 4th, 2009. On September 25, 2011, Bob died at home surrounded by his loving family. He left this world to be with his wife of 67 years, along with their son, David Evan Riner, who preceded them in death in 1990. Bob was the proud father of Jayne Riner (Ron) Thompson, Gaye Riner (Ed) Gott, and John Robert (Kathy) Riner, all of Jamestown, and daughter-in-law, Karen Riner (Greg) Buchheit of Louisville, KY. Bob was also blessed with 11 grandchildren; Chris (Pam) Reese, Jeff (Libby) Reese, Neil Gott, Jennifer (Tony) Bayles, Brian (Kylene) Gott, Megan Goodlett, Kurt (April) Gott, Joe (Jill) Riner, Lt. Jason Riner, Elizabeth Riner, Thomas Riner and 3 step-grandchildren Kylene (Brian) Gott, Kimberly (Dustin) Cunningham and Kevin (Ashley) Barker. He also had 16 great-grandchildren and 3 step-great grandchildren. He is also survived by several cousins, nieces and nephews. Bob was a lifetime farmer and the owner of Riner Radio. He was a member of the Advance Christian Church, Farm Bureau and Good Sams of Boone County. Bob was a Minute Man for the Boone County REMC representing Jackson Twsp. He was a 60+ year member of the Hazelrig Lodge F&AM 200. He was a former member of the Advance American Legion Post 201. While living in Advance, Bob was a volunteer at the Advance Fire Department. Bob served in the United States Navy from 1942-1945 at the Naval Air Station located in Norfolk, Virginia. In 2007, Bob was honored by the Breeders and Feeders Association for his years of farming and community service. Bob never knew a stranger and always had a funny story to tell, sometimes more than once! Family was very important to Bob. He was so proud of his children, grandchildren and great grandchildren and for all their accomplishments. He will be greatly missed by his family and friends. His family would like to thank Bob’s caregivers and the special care he received from the Advocate Hospice, especially Pastor Dave Clayton, Bob’s spiritual leader and dear friend! Friends will be received Friday, September 30, 2:00-8:00 p.m. at the Advance Community Christian Church, Advance, Indiana. Services will be held at Advance Community Christian Church, Saturday, October 1, 2011 at 2:00 p.m., with calling 1 hour prior. Reverend Raymond Duff and Pastor David Clayton will be officiating. Interment will follow in the Old Union Cemetery. Memorial contributions may be made to the Women’s Fellowship of Advance Christian Church, 2675 S. State Road 75, Jamestown, IN 47147 or the Boone County Senior Services, 515 Crown Point Drive, Lebanon, IN 46052. Online condolences may be made at www.porterfuneralhome.us