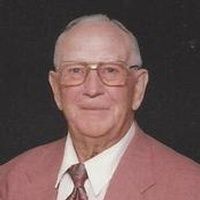 Russell E. Farrow, 93, of Jamestown, died peacefully on March 11, 2013 in Lebanon. Born January 7, 1920, he was the son of William Thomas (Tom) and Gertie (Buechler) Farrow; they preceded him in death. He married the late Fern I. Perkins on March 13, 1947 and she passed away on March 13, 2004. Russell graduated from Advance High School in 1938 and farmed his entire life in the Jamestown community and retired from the U.S. Postal Service. He was active in the community by serving as the President of the S & C Club at Granville Wells School as well as serving on Band Boosters. He was a devoted father, husband, and grandfather. He always exhibited a high work ethic and also had a winsome sense of humor. Russell enjoyed woodworking, shuffleboard, and playing cards with his friends. He and his wife attended many of their granddaughters’ softball games. Upon his retirement, he and Fern spent 17 years in Bonita Springs, Florida during the winter months. Russell was a former member of Mt. Zion United Methodist Church and served as the superintendent various years until its closing in 1973. One of the things he enjoyed the most was working with the young people at Mt. Zion. Meetings were held in their home and there were some all night croquet tournaments played with the assistance of flood lights and ping pong was played in the basement. He transferred his membership to Jamestown United Methodist Church and was an active participant serving on various committees and was a trustee for many years. Survivors include daughters, Jean (Phil) Zimmerman of New Ross and Barb Farrow of Westfield; brother Edward Farrow of Crawfordsville; granddaughters Jennifer Broida of Speedway and Julie (Ryan) Hawkins of Lebanon. He also has 2 great-granddaughters (Maddie and Lauren) and 2 great-grandsons (Gavin and Michael). Visitation will be Thursday, March 14, 2013 from 3 to 8 p.m. at Porter Funeral Home, 315 W. Main Street, Jamestown. Services will be held Friday, March 15 at 10:30 a.m. at the funeral home with Rev. Fred Tanselle officiating. Burial will be at Jamestown I.O.O. F. Cemetery. Memorial contributions may be made to Jamestown United Methodist Church, P.O. Box 173 Jamestown, IN 46147. Online condolences may be made at www.porterfuneralhome.us