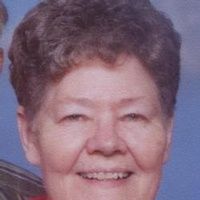 Ruth Ann (Wilson) Wiles, 75, of North Salem, passed away on March 27, 2015. Ruth Ann was born March 30, 1939 to Homer and Hazel (Vansickle) Wilson in Jamestown, IN. She was a graduate of North Salem High School and a member of the North Salem Christian Church, Gerald and Ruth Ann were married on June 16, 1957. She enjoyed cooking and spending time with her family. Ruth Ann is survived by her loving husband of 57 years, Gerald; sons Curtis (Rhonda), Eric (Julie), Greg (Amy) Jason (Jennifer) and daughter Michelle (Scott) Phillips; 14 grandchildren and 8 great-grandchildren. She was preceded in death by her father, mother and brother, Jim. Visitation will be Tuesday, March 31, 2015 from 4-8 p.m. and services will be held Wednesday, April 1, 2015 at 11 a.m. at North Salem Christian Church. Burial will follow at Fairview Cemetery, North Salem, IN. Memorial contributions may be made to North Salem Christian Church, P.O. Box 65, North Salem, IN 46165