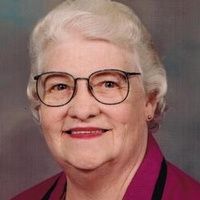 Ruth Miller, 84 of Ladoga, IN, passed away Tuesday, March 21, 2017. She was born December 24, 1932 in West Virginia, daughter of the late Albert and Mabel (Bragg) Canterbury. Ruth is survived by her daughters, Donna Fay (Drew) Dickerson of Ladoga and Delores (Rob) Henderson of Wingate, 9 grandchildren and 12 great-grandchildren. She was preceded in death by her husband, Asa Dallas Miller, her siblings and one grandchild. Family and friends will gather Saturday, March 25, 2017, 11:00 a.m. until time of service at 12:00 p.m. at the Ladoga Community Church, 6066 East SR 234, Ladoga, IN, with Bob Vice officiating. Ruth will be laid to rest in the New Ross Cemetery. Online condolences may be made at www.porterfuneralhome.us