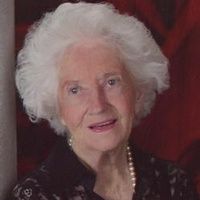 Vera I Feather, 98 years old of New Ross, IN, passed away Tuesday, September 29, 2015 at Bickford Cottage, Crawfordsville. Vera was born September 21, 1917 in Crawfordsville, IN, daughter of the late Guy and Maude (Cedars) Miles. She married Dawson R. Feather on August 8, 1942. He preceded her in death. She was a member of New Ross Christian Service Club and the New Ross Homemaker’s Club. She is survived by her daughter, Pam Ford of Florida, son, Tom (Beverly) Feather of New Ross, grandchildren, Scott Ford, Chris Feather and Courtney (Scott) Kistler and 2 great-grandchildren. In addition to her husband, Dawson R. Feather she was preceded in death by her sisters, Eleanor Miles, Esther Stewart and Caroline Harland. There will be a graveside service at the New Ross Cemetery, Thursday, October 1, 2015 at 12:00 p.m. In lieu of flowers, memorial contributions may be made to the New Ross Christian Church, PO Box 182 New Ross, IN 47968. You may visit our website, www.porterfuneralhome.us, to sign her online register and leave a personal message.