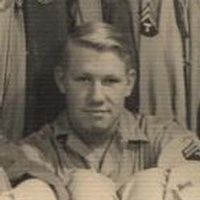 Andrew J. Eberwein, 87, of Bainbridge, Indiana, died Saturday, April 26 at the Community North Hospital in Indianapolis. He was the son of the late Samuel D. and Mary Katheryn Price Eberwein. Andrew was born in Jennings County, Indiana on April 8, 1927. He graduated from the Lebanon High School and was Honorably Discharged from the United States Army having served with the Air Corps in Italy. Andrew married Evelyn Elizabeth Tharp on April 24, 1948 in Indianapolis. This year they celebrated their 66 year union in marriage. After the Army, Andrew started driving a tanker truck for the RefinersTransport Company. He worked for 34.5 years and then purchased a family farm. Survivors include his wife; daughter, Kathy Lyn Morrical of North Salem; siblings, Jesse (Beverly) Eberwein of Florida, Elsie Bevington of Lebanon and Leonard (Bonnie) Eberwein of Plainfied; five grandchildren and five great-grandchildren. He was preceded in death by his son, Michael Alan Eberwein and brother-in-law, Mervin Bevington. Family and friends will gather on Tuesday, April 29 from 4:00 p.m. until 8:00 p.m. in the Porter Funeral Home, North Salem Chapel, 6 S. California Street, North Salem, Indiana. The Rev. Ann Spahr will officiate his funeral service on Wednesday, April 30 at 11:00 a.m. in the funeral home. Mr. Eberwein will be laid to rest in the Roachdale Cemetery where military rites will be presented. You are invited to visit our website www.robertporterfuneralhome.com where you may sign his online register and leave a personal message.