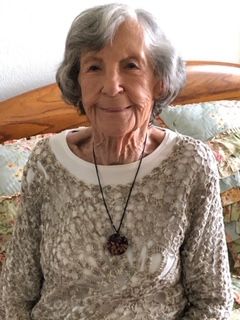 Edith May Kinnaman Shaul, 99, Indianapolis, was called to the Lord on November 23, 2019.She was born on May 17, 1920 in Sheridan, Indiana and raised in New Lisbon, Indiana. She married Richard Shaul on January 27, 1940 until his death in 1972. She was later married to James Ackelmire until his passing in 1986. Edith worked for the Southport Elementary School cafeteria, now Homecroft, for many years until her eventual employment and retirement with Eli Lilly. After retirement, she worked at Sam’s Club until she was 90 years old. She drove until she was 93, and was full of energy and life up to the end. She had countless friends and never forgot a single person. “Grannie” as she was known by family was always active and lived independently. She was an avid reader and enjoyed playing cards with her friends at Brookhaven Senior Apartments and was definitely a social butterfly. She attended the Church of the Lakes in Nineveh, Indiana until she quit driving and was a person of faith. She enjoyed sending handwritten letters to everyone. Deciphering those letters was definitely a task in itself but appreciated nonetheless. In fact, on her nightstand there were many envelopes addressed with postage attached that were ready for mailing. She leaves behind a son, Tim (Debbie) Shaul and daughter Julie (Phil) Weaver; grandchildren, Bryan Shaul, Erin Shaul, Alyssa (John) Tackett, Erika (Craig) Buse, Michelle Phelps, Kristen Weaver, Matthew Shaul, and three great grandchildren. She was preceded in death by a son Andrew Shaul.Calling will take place from 12-2PM, Saturday, November 30, at Singleton & Herr Mortuary, 7602 Madison Avenue, Indianapolis. Pastor Jon Lucas will officiate a funeral service to follow at 2PM. She will be laid to rest at Mt. Pleasant Cemetery in Greenwood.Memorial contributions are suggested to the Church of the Lakes, 8844 Nineveh Road, Nineveh, IN 46164. You are invited to read Edith’s obituary at www.singletonandherrmortuary.com, where you may sign the online register book or leave a condolence for the family.