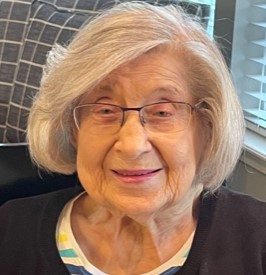 Estella Evelyn Hehn Harrison was born July 27, 1929 to Andrew Hehn and Bertha Kuebler Hehn in the rural farming area of Eureka, South Dakota, a heavily populated German settlement.  She passed away on June 15, 2022 in Franklin, Indiana.

Just four months after she was born, and continuing for the next ten years, The Great Depression threatened their family survival.  During those ten years, it was luxury to be able to attend a weekly movie for 10 cents or even purchase candy for 5 cents.  Even though she was a child, she did not question why these simple luxuries were not in their budget, Yet, she did recall there were a few times her parents “found” a dime or nickel and dropped them in her hand.  She did not have to be told where to spend the money – off to the movie and the candy store she went.

She attended the country school in Eureka.  The family were farmers and the country school was a mile and a half away, so instead of walking to school, she decided to ride one of the horses, thinking that would be better.  Yes, it was better, except when she had to feed and water the horse during recess instead of playing with her friends.  It only took a few days of not playing with her friends at recess that she decided walking to school was not so bad after all.   On the other hand, during the very cold, snowy South Dakota winters, walking to school could be dangerous.  Thus, her father, like many other fathers, would hitch up a horse-drawn sleigh and Estella would ride to school in style.  As a teenager and in high school, Estella found work at a local cafe and then a local dime store to help provide and contribute funds to the family budget.

Around 1949, she left South Dakota and moved to the amazing and thriving city of San Francisco.  Immediately, she found a job and was hired as a clerk for the FW Woolworth company.  A co-worker arranged a blind date for both of them, and it was that date with Wallace Harrison, a navy sailor, that swept her off her feet.  It was love at first sight and he became the “love of her life.”  Sometime later, Wally received orders that he was being stationed to a new duty station in Pensacola, Florida.  He left San Francisco and told Estella that he would send for her as soon as possible and that they would be married.  Once settled, he wired Estella to join him and they were married on June 13, 1950 in Pensacola.  For the next three years, she and Wally enjoyed every minute together as a military couple.  The Navy provided a variety of life experiences as they were stationed in many exciting and wonderful cities.

After Wally’s discharge from the Navy, in 1953, they moved to Indianapolis and their three daughters were born.  Eventually, they permanently located in Greenwood, Indiana and remained there until they retired.  They enjoyed wintering in Florida and returning to Greenwood/Franklin during the summers.

Estella belonged to many fraternal organizations including: Greenwood Eastern Star, Chapter 390, Ladies Oriental Shrine of North America, American Legion Auxiliary, Red Hats, Shrine Guild of America and the Johnson County Shrine Club.  It was while working beside her husband at the Johnson County Shrine Club, that she became the unofficial greeter welcoming visitors to the club.  One individual commented, “You always make everyone feel welcome.  You are a good ambassador.”  Estella always saw the good in others and put their needs even before her own.  She loved these organizations and the many friends that she associated with.

She loved the music of the big band era, dancing the jitterbug, reading books, working crossword puzzles and eating sweets, especially black licorice.  She was an immaculate house keeper and lived life to its fullest.  She was proud of her family, her grandchildren and her great grandchildren.

She was a wonderful daughter, a faithful wife, a nurturing mother and a loving grandmother.  Her faith sustained her and she believed in God.  She has lived alone since the passing of her beloved Wally, eleven years ago, and has looked forward, every day, to the moment when they would be reunited again.

Estella was preceded in death by her parents; beloved husband, Wally; and her two brothers; Floyd and Clarence Hehn

The family would like to express their appreciation to Johnson Memorial Hospital and staff for their excellent medical care and kindness that was extended to Estella and to Wilson St. Pierre Funeral Service & Crematory, Greenwood Chapel for their professionalism in respecting the dignity of their mother and grandmother.

There will be a private family burial only.

Plant a Tree
Charity
Donate Now
Events
There are no events scheduled. To plant a tree in memory of Estella Harrison, visit the Tribute Store
×
×
Donations
[donation_list][/donation_list]