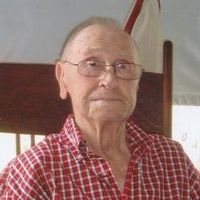 Howard Eugene Woodrum, born July 23, 1918 in Indiana, to James Edward Woodrum and Viola Phillips Woodrum. Howard passed away on May 12, 2014. Howard married Eva Isabelle Walter on March 10, 1950 in North Salem, Indiana. She preceded him in death in 2011. He was a lifelong farmer in Boone and Hendricks Counties, retiring in 1982. He was a janitor at the Pittsboro Elementary in Pittsboro, Indiana during the 1980’s. Survivors are sons, Ronald (Cindy) Woodrum of Beaver Dam, KY, James L. (Robin) Woodrum of Lizton, IN and a daughter, Janet Woodrum, of Lizton, IN., four grandsons, 3 granddaughters, 6 great-grandchildren, sister-in-laws, Marilyn Walter Gossett of Greenfield, IN and Shirley Walter of Danville, IN and numerous nieces and nephews. In addition to his wife and parents, six sisters preceded him in death. Family and friends will gather 11:00 a.m -2:00 p.m. Thursday, May 15, 2014 at the Porter Funeral Home, Jamestown, Indiana. Services will follow at 2:00 p.m. at the funeral home. Howard will be laid to rest in the Lizton K of P Cemetery. Memorial contributions may be made to the American Cancer Society, 5635 W. 96th Street, Suite 100, Indianapolis, IN 46278. You are invited to visit our website, www.porterfuneralhome.us, where you may sign his online register and leave a personal message.