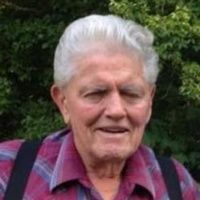 Jesse A Smith, 72 years old of Danville, IN, passed away Tuesday, April 15, 2014. He was born September 21, 1941 in Aroma, IN, son of the late Hubert Leslie and Ottie Pearl (Marcum) Smith. Hubert and Ottie were married on November 27, 1940. Jesse married Janet Lucille Eggers on July 2, 1960. She preceded him in death in 1996. He was a member of the Covenant Grace Fellowship Church in North Salem and the Moose Lodge. Surviving are sons, Dennis (Debbie) Smith of Greencastle and Gary (Trecia) Smith of Reelsville, daughters, Diana (Oscar) Hatcher of Danville and Kristi Boyer of Coatesville, brothers, Leroy (Susie) Smith of North Salem and Hubert (Glenda) Smith, Jr. of North Salem, sisters, Mary Strietelmeier of Jamestown, Anna (Ronnie) Clements of Jamestown and Judy Smith of Jamestown, 11 grandchildren and 11 great-grandchildren. Jesse was preceded in death by one son, Mark Smith. Family and friends will gather Friday, April 18, 2014 4:00-8:00 p.m. at the Porter Funeral Home, North Salem, IN. Services will be held at the funeral home, Saturday, April 19 at 11:00 a.m. with Hubert Smith, Jr. officiating. Jesse will be laid to rest at the Fairview Cemetery. You are invited to visit our website, www.porterfuneralhome.us, where you may sign his online register and leave a personal message.