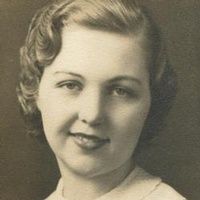 Kathryn Jane Harris, 96, of Crawfordsville, IN, passed away Saturday, Jan. 30, 2016 at Ben Hur Health and Rehabilitation in Crawfordsville. She was born October 16, 1919 in New Ross, IN, a daughter of the late Frank and Ruby (Garvey) Johnson. She was married to Samuel D. Harris. Kathryn graduated from New Ross High School. During World War II, she worked at Allison as a “Rosie the Riveter.” She also worked at 3-D and Danners in Crawfordsville for a number of years. She was passionate about her children and her grandchildren and she enjoyed cooking. She was a member of the Home Economic Club and the New Ross Methodist Church. She is survived by her four children David (Patricia) Harris of Mission, TX, Donna Paul of Raccoon Lake, Judith “Judy” (Gene) Covert of Crawfordsville, IN, and Steve Harris of New Ross, IN; 8 grandchildren, 8 great-grandchildren, 5 great-great-grandchildren, and one nephew Gary (Madonna) Johnson. In addition to her husband and parents, Kathryn was preceded in death by her brother Jack Johnson, her grandchild Kelly Paul, her son-in-law David Paul, and her daughter-in-law Rox Anne Harris. Family and friends will gather Wed., Feb. 3, 2016, for visitation from 4 until 7 p.m. and services will be held at 11 a.m. Thurs., Feb. 4 in the Porter Funeral Home, Jamestown, IN. Kathryn will be laid to rest at Pisgah Cemetery. Memorial contributions may be made to the New Ross United Methodist Church, PO Box 95, New Ross, IN 47968 or the Walnut Township Fire Department, PO Box 241, New Ross, IN 47968. You’re invited to visit the website, www.porterfuneralhome.us, where you may sign her online register and leave a personal message.