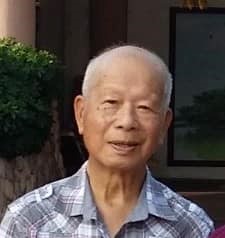 On Friday morning, May 20, 2022, Lum Lee, age 87, loving husband of Bik Yu (Becky) Lee and beloved father of five children, unexpectedly passed away at Community Hospital South after a sudden, brief illness.
Lum was born on December 27, 1934, in the city of Taishan in Guangdong province, China and emigrated to the United States in 1951. After graduating from Shortridge High school, he was drafted and proudly served in the United States Army. He enjoyed sharing stories of his time stationed in Germany. In 1962 he married Bik, and they settled in Greenwood to raise their family. Lum was a founding partner of the Lotus Garden Restaurant in Greenwood and Carmel. He was well known not only for his hospitality in the restaurant, but also for his expertise in teaching Chinese cooking in classes at IUPUI and in demonstrations on The Jim Gerard Show. Many customers tried their first Cantonese-style Chinese food in his restaurant, but he also made sure the menu included American food so that families with different tastes could dine together. He proudly served his community for 34 years.
Lum had a passion for gardening, fishing, and having coffee with his friends. He was known for his generosity and willingness to help others.
He is preceded in death by his father, Daniel Lee, mother, Yuet Don Lee, and sister.
Survivors include his wife of 60 years, Bik Yu Lee; his children Elaine Lee, Donna Hawes, Cathy Lee-Everett, Pauline Lee, and Michael Lee, M.D.; and his granddaughter, Gina Everett.
Funeral services will be held on Tuesday, May 31, 2022, at 1:00PM at Wilson St. Pierre Funeral Service and Crematory- Greenwood Chapel, 481 W. Main St., Greenwood, IN 46142. A visitation will be held from 10AM-1:00PM. Burial with military honors will immediately follow at Washington Park East Cemetery.