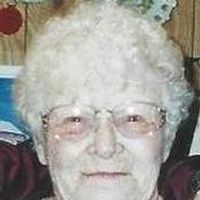 Marjorie Veatch Gibbs passed away Sunday, March 3, 2013 at Danville Regional Healthcare. She was born near New Brunswick to Russell and Bernice Veatch on February 25, 1926. The family lived at Raintown for most of Marjorie’s early life. She graduated from Lizton High School in 1944. Marjorie married Basil T Gibbs on November 20, 1948. Basil passed away on August 31, 1978. They lived in Brownsburg and Danville before settling on the farm southwest of Lizton. Five boys were born to them and raised on the family farm. She worked at Public Service for several years. She also worked at the North Salem Elementary School and later in the Northwest Hendricks Superintendent’s office. Her survivors include sons, Dean (Teresa) of Pittsboro, Roger of San Antonio, TX, Russell, Rex and Stanley of Lizton, two grandsons, Aaron (Lorinda) Gibbs and Nick (Brittny) Gibbs, great-grandchildren, Lane, Ava, Lily and Shamus Gibbs. She also leaves her “chosen brother’ Lowell Baily, her friend and helper Diane Jobe and her dedicated “nurse friend” Julie Nikirk. In addition to her husband Basil, Marjorie was preceded in death by her parents and a granddaughter, Heather Gibbs. Family and friends will gather Thursday, March 7, 2013 at the Porter Funeral Home, Jamestown, Indiana from 11:00 a.m.-1:00 p.m. Graveside service will follow at the St. Malachy Cemetery in Brownsburg. In lieu of flowers, donations in Marjorie’s memory may be made to the organization of your choice. Online condolences may be made at www.porterfuneralhome.us