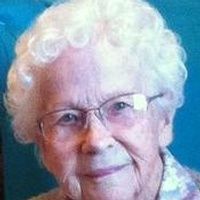 Ruth Elizabeth Glim, 97, of New Ross, died Wednesday, November 21, 2012 at Bickford Cottage in Crawfordsville. She was born December 14, 1914 in New Ross, Indiana, the daughter of the late Walter Virgil and Grace (Webster) Bratton. Ruth married Bernard Lewis Glim in 1946. He preceded her in death. She graduated from Purdue University with a bachelor’s degree in Home Economics. Ruth enjoyed gardening and sewing. She was a member of New Ross Methodist Church where she was an organist for many years. Surviving are her daughter, Pamela Elizabeth Glim of Solsberry, IN, son, Bernard Robert (Diane) Glim of Pacific Grove, CA, and her granddaughter, Ayla Marlene Glim. She was preceded in death by her brother, Robert W. Bratton. Friends will be received Thursday, November 29, 10:00 a.m.- 12:00 p.m. at the Porter Funeral Home, Jamestown, Indiana. Service will follow with Rev. Rodger Ward officiating. Interment will follow in the New Ross Cemetery. Online condolences may be made at www.porterfuneralhome.us